Three years, three minutes, three weeks...the number 3. What does each have in common? A beautiful little boy named William Roland Nauman. William was longed for, prayed for...BEGGED for, for three years, as his parents wanted to have a child of their own. When they found out they were going to be parents, there was so much joy and anticipation in their lives. All the planning and buying that had to be done for this precious boy, they vowed to be ready for his due date, Christmas 2017. What a gift he would be! But William came earlier than expected. On November 24th, at 10:42 in the morning, he came into this world. It was unlike anything his parents or...what I, his mother, expected. It became an emergency delivery. They worked on him for three minutes to resuscitate and stabilize him before sending him to the NICU. It was hours before we were told they were transferring him to the local children's hospital for what they thought was a heart condition. Having had a c-section, I was unable to go with him. They allowed me to see him in his incubator before his transport, and my husband drove following behind the ambulance.

Being back at our local hospital without my baby or my husband was hard, but honestly, my ignorance to the true magnitude of what was going on probably saved my sanity. That night I got a call from my husband. As I picked up the phone, all I could hear was a man crying, and then...the phone cut out. What happened? Is he ok? The idea of my son dying was NEVER on my mind. I quickly called back. “Is he ok?” I asked. All my husband could say was “...his brain.” I waited a few seconds and my husband eventually explained that something was wrong with William’s brain and that they were going to life-flight him to Stanford Hospital that night. It turned out that William had an AVM in his brain, and it was causing too much blood to go to his heart.

The doctor at Valley Children’s hadn’t seen an AVM in 40 years and knew their hospital wasn't equipped to handle what William needed. We set up a plan, family members going here and there and all the other logistics. I rang for the nurse and told her I wanted to leave. I’m not joking. She wasn’t allowed, and so she called my doctor and my doctor convinced me to stay 12 hours more to make sure I would be ok. “You won't be helping your son if you have to be admitted while you are up there too”, I remember her telling me. I knew she was right, so I agreed to 12 hours and nothing more. She promised me she would be there first thing in the morning to check on me and prepare for discharge. When I was finally released, my best friend and I headed up to Stanford, which felt like it took forever.

I arrived at Stanford Lucile Packard Children’s Hospital and immediately went to the NICU to see William. The tiny room, jam packed with incubators and random beeping noises at any moment was where I would spend the next three weeks reading to him, singing to him, holding him, even changing him. Again, losing him NEVER crossed my mind, even as monitors would go off...I never worried it was him. After about a week, the doctors suggested doing an embolization in a large vein to try and slow the blood that was rushing to his heart. Their main goal was to help his body not have to work so hard, so he could grow and then do more surgeries in the future. After the first, embolization of the larger vein, they saw more areas of concern. So, a week after that they went back into his brain to embolize the other areas. Yet again, more areas of concern popped up. They waited 24 hours and William was still not responding well. It was decided that the team would go in again the following day and try to embolize some more areas. Around 8pm, the night of the surgery, we got the call that they were finishing up and they would be heading back to the NICU. Not 45 minutes later, the doctor called and told us William had hemoragged while they were closing him up. He had a rupture and it damaged his spinal cord. They brought him back to the NICU and he just looked different. The next day we had a meeting with his team. I mentally wasn't ready to hear what they had to say. All I heard was that he wasn’t having seizures anymore. I kept looking for signs he was going to be ok. It NEVER crossed my mind he would die. One doctor told us William was beautiful, but his brain was a mess. My husband and I finally had to have that discussion. What did we want for William? The doctors told us IF he survived he would have no quality of life. How could I let my son live without a quality of life, just so that he was here with me? I didn't want that for him. We finally made the decision to take him off of life support three weeks from the day he was born. I held him in my arms as he took his last breath.

But, his story doesn't end there.

Coming home to an empty nursery was hard at first, but it actually became my place to escape. I felt closer to William there. Every night I would go into his nursery, sit in his rocking chair and sing the songs I sang to him in the hospital. I would read to him the book I read to him every night before bed in the hospital. It is called Be Brave, Little One. I read it to him as a way to tell him to be strong, fight, and to be brave... and boy was he ever. As I would sit there in his nursery, I felt as though he was reading it to me now. Be Brave, Momma. It spoke straight to my heart. I needed to be brave for him. I needed to continue his purpose, and it was my job to figure it out.

I am a “do”er. I wanted to keep going, to keep sharing William, to keep his purpose going. But, deep down it was a fear of people forgetting him that really drove me. You see, as a mother of a child who dies, our biggest fear is that our child will be forgotten because life for others goes on. But for us...it’s different. That’s what makes holidays or even the small moments so hard because they aren’t in the family pictures, or sitting at the dinner table at Thanksgiving, etc. You can be having a conversation totally unrelated to them and something will trigger you and remind you that they aren't there.

I wanted to do everything in my power to keep that feeling from happening to me, at least as much as I could control. I figured out ways to incorporate William into every part of my life...intentionally. We would take our “William Bear” anywhere we went… vacations, holidays, 5K walks...everywhere! Others may not have known it, but he was there. I wouldn't have left my child at home for those things, I wasn’t going to leave William either, even if it was a representation of him. But I needed more, I needed to feel like I was creating a legacy for William. How could I keep his memory going even if I wasn't there to do it?

One day, I was scrolling on the internet when I saw The Aneurysm and AVM Foundation website. WHY HADN’T I SEEN THIS BEFORE?! All the research that I had done while William was in the hospital, it never came up. I quickly called the number and a WONDERFUL woman, Dina Chon, talked with me for what seemed like forever. I’m pretty sure she thought I was crazy. I wanted to do something, be a part of their organization...ANYTHING to keep William’s memory alive! She told me about the Rare Disease Day in Sacramento (little did she know my passion for social justice and advocacy) and I was in! We met in Sacramento and did our advocating, which was great, but our conversation over coffee after was the catalyst for my current work with TAAF. We were both survivors of loss. Although we experienced different losses, we understood each other's pain and need to serve.  Our connection became a friendship and that friendship has allowed me to do so many things to bring awareness, advocacy, and most important to me...a legacy for William.

Throughout this journey there are good days and bad moments and/or days. The bad days include asking questions that will never have answers; scrolling through pictures and wondering what he would look like now, or that he would have been three years old this year; listening to music that reminds me of him and the songs I sang to him; and sitting in that rocking chair that he never got to sit in with me as I snuggled him to sleep. I know these days, these moments, will never go away because grief comes from love and my love for him will never end. But, there are good days too. And those days have started to outweigh the bad. On those days, I think about all the blessings that I have had on this journey. I got to be with him and experience him for three weeks. Seeing his eyes, hearing his cry, smelling his body as I held him in my arms...some parents don’t get that. I had amazing medical professionals to guide us through the process and amazing nurses to support us, some who have become our friends. We have a wonderful family, church family, and friends who were with us at a drop of a hat and supported us because we are family...no matter what. I have found a family at TAAF, an amazing organization that is helping me build a legacy for William that will carry on his purpose long after I am able. And William still shows me how to be brave. I know that he is guiding my path and sending me reminders of him. Whether it’s seeing a squirrel playing outside or while looking at the stars at night, I know he is with me. He even sent us a gift a year later--his little brother, Logan--so that I can experience all those physical things I want to experience as a mom, all while keeping William close to my heart.

So, as we go through this holiday season, remember, even in the hardest of times, whether it was three years of infertility, three minutes of resuscitation, there are always be the smallest of blessings, even if it was only three weeks of the most amazing time with a sweet baby boy named William. Try to focus on those things. The chair may always be empty, but your heart can be overflowing with love.

Click the photo to learn more about Nancy Nauman. 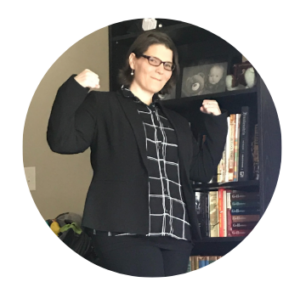