Gratitude and anger often coexist. It’s not an anomaly; it’s the truth of life.  Over 12 years ago, I had the unfortunate experience of having a ruptured AVM. I didn’t know the AVM existed, and I wouldn’t know until about a month later when I regained consciousness and was told what had happened to me. Many people, when faced with one of life’s challenges, ask “Why me? Why did this happen to me?” I never did. I guess I always figured “Why not me? If not me, then who?” It wasn’t as if anyone deserved something like this.

When I was in rehab, relearning how to swallow, stand, walk, etc., I was always the optimistic one. I cracked jokes with my physical therapists when I would fall down and need help standing back up. In fact, because I was so upbeat, one of the nurses (Dr. Matt, I called him) asked me to speak to another brain injury patient in the rehab unit. The man had refused to get out of bed, refused to attempt any kind of therapy. Dr. Matt asked me to talk to him and see if I could get through to him.

I spoke to the man, whose name I cannot remember (stupid brain injury!). I don’t remember our exact conversation. It was something along the lines of… “You can’t give up. What happened really stinks. There’s no denying it, but you have to try. If not for yourself, then for your family. They deserve your best efforts.” You know the spiel. Whatever I said, it must have made an impact because the next day he got out of bed and started his physical therapy.

I kept my positive attitude the entire month I was in rehab and even when I finally got to go home. But what I didn’t realize was that hidden behind my oh-so-sunny disposition, was anger. Not mere annoyance or irritation, but real indignation and rage. Over these years I have been, sometimes, very, very angry.

When I was in the hospital those 3 months, friends would come to visit. They’d bring magazines or books. We’d laugh. A couple of friends even shaved my legs because I couldn’t, and I was horrified by the sight of my hairy legs. After I came home, that stopped and rather abruptly. I couldn’t really fault any of my friends; they all had lives too, but I have to admit that it hurt and it made me a bit angry.

One of those friends was also a former neighbor. She was the president of the PTA at the elementary school where my daughters attended. The girls were 8 and 5 at the time, in 3rd grade and Kindergarten. Not one time during my 3-month hospital stay did this person ever reach out to my husband or our daughters to make sure they were doing ok. Not once did she ask their teachers if they seemed to be handling it well and still doing their schoolwork. Not once did she ever offer any sort of help or show compassion toward our family. When I found out about this I was enraged! Even now, all these years later I still carry that grudge and will not speak to her if our paths cross, which they have as our kids attended the same schools.

In the beginning of my post AVM life, both of our daughters played soccer. In fact, when I had my rupture, we were getting ready to go to our oldest daughter’s soccer tournament. Obviously, the other player’s families became aware that something had happened and would ask my husband about me and were genuinely concerned. The first time I was able to go to one of our daughter’s soccer games, a parent of another player came up to me and asked what had happened to me. At the time I was still mostly bald and wore a bandanna to cover my head and the amazing scar that ran all the way around my head. I told him that I had suffered a brain hemorrhage to which he replied, “Oh, so it wasn’t like cancer, so not that serious.” I was too shocked and angered to even respond. Let me tell you, I’ve now had both a brain hemorrhage and cancer, and the brain hemorrhage was 100 times worse.  Not to discount the seriousness of cancer, believe me, but for me this is true.

One of the most difficult things about my illness was the financial burden it put on our family. My husband was a builder at the time and the housing market had tanked. He was laid off and I was the breadwinner, so to speak. The company I worked for was absolutely amazing and agreed to continue to pay me as I tried to recover allowing me to keep our health insurance. I did try to go back to work, several months later, but it was clear I would not be able to continue working. It was just too difficult, both physically (I was exhausted) and mentally. I’d lost the ability to recognize numbers in groups, and when one of your duties is to oversee accounts payable and accounts receivable, that’s rather inconvenient! I knew I had to resign.

Even with insurance, the medical bills were not insignificant, and we ended up paying a fraction of what could have been nearly a $750,000 bill. Why, in one of the richest countries in the world, are families forced to choose between life and death–literally–because they can’t afford their healthcare? This is something that angers me nearly every day!

Because I was no longer able to work, I decided to apply for Social Security Disability benefits. We desperately needed money. My husband did get a job a few months later, but we were behind, obviously. My first application was denied. My second application was also denied. I ended up having to hire an attorney to help me win my benefits. It took over two years, but I was finally awarded benefits. I am incensed that our community must fight so hard to be able to access our own money! There is absolutely no reason it should be this hard or take so long.

Plus there’s the attitudes! People sometimes ask why I can’t work. After all, I look fine. I can walk, I can talk, I can cook and only occasionally start kitchen fires… so what’s the problem? Because my deficits are all in my head, literally, no one understands why I would need to be on disability. It’s maddening, but I’m much more used to it now.

Sometimes my anger manifests itself suddenly and without warning. One evening our family was visiting some friends and we were all preparing dinner. I was chopping potatoes. I apparently wasn’t chopping fast enough and my friend grabbed the knife out of my hand and said “here, let me do it.” I exploded! I stomped out the door and sat on the front porch while I regained my cool. Looking back my reaction was way over the top, but it was that lack of filter thing so many of us survivors struggle with.

Even now people are still trying to do things for me because they get frustrated watching me struggle. My husband, God love him (seriously he’s incredible!), will say… “Why don’t you do it this way?” Or “Here, let me help you,” or “Why are you doing it that way?” I get mad and snap at him sometimes. What he and others often forget is that I need to do things my own way, at my own pace. It may not be the best way or always yield the best results, but it is another step in regaining some of what was lost. It is good for ME, and that is always good for my anger.

Without question, what makes me the angriest is when some well-meaning person says, “You should just be happy that you’re alive.” Let me just say, I am profoundly grateful for whatever cosmic events occurred the day of my rupture and the weeks and months after that lead to my survival. My husband still has a wife; our daughters still have a mother, even if I’m slightly imperfect now. Yes, I am happy to be alive. I am also mostly blind, and thus unable to drive. I have occasional bouts of vertigo that leave me quite nauseous, dizzy and “fuzzy” in the head. These can last for a few hours or a few days. I don’t do well in crowded spaces, or in loud spaces, or unfamiliar places. Heck, I can still get lost in my own neighborhood and I’ve lived here for 25 years! I’m still plagued with incredible fatigue at times. This is “brain fatigue” and is much different than just being tired. Life for me is challenging.

Challenging is not to say I’m not happy; I am quite happy. Life after an AVM rupture can be difficult and maddeningly frustrating at times. I am forever filled with gratitude. As I said, gratitude and anger often coexist. In fact, I believe it is necessary to feel both as long as happiness wins. Always allow happiness to win. Find your joys, be they reading, or volunteering, your kids, you (yes, YOU are awesome), or even beer.  I love beer and it has become a passion for me, one of my happiness’s.  Anger is important and valid.  There is no but… Allow yourself to be angry and always allow happiness to win.

Click the photo to learn more about Trish Speake. 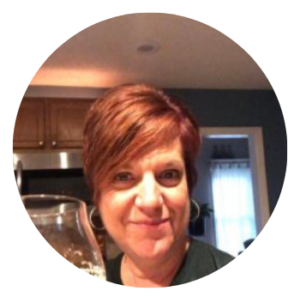