Not Just a Headache

It all started in December 1998 in Puerto Rico, when I was a 19 year old college student in the first semester of my sophomore year. At that time I had never heard the term AVM.  In fact, I also didn’t know the symptoms of a stroke. In December I was in my final exams. I studied a lot and didn’t get enough sleep. I had terrible headaches, but all my friends had them too which is why I did not think that my life was at risk.

December 20th, I told my mother that I didn’t want to go to the hospital, that I would go in the morning. I woke up in the middle of the night feeling that my head was going to explode. I almost couldn’t breathe because of the pain. I had a seizure and went into a coma. I’d had an AVM rupture.

I was in a coma for one week. The neurosurgeon told my family that they had to accept that if I woke up I would not be able to move, speak, or see, that I would be a burden to society. He also said that the cost of therapies would be like throwing money in the trash, adding that the money should go to poor children who need it. My family never lost hope. They told the doctor that they believe in miracles and that I would survive. They were right.

When I woke up, I was confused. I didn’t know where I was or why I was in that place. I couldn’t move and nobody understood me when I spoke to them. All I knew was that something happened, that I was grateful to God that I was alive, and that I would be fine.

Amazingly, I was stable three weeks later and I returned to my home. My family had already explained to me what had happened, that I had an AVM rupture, and needed brain surgery. At first I was scared, but I soon felt at peace. I knew that God was at my side and would never leave me alone. I was very positive and calm even though, at the time, I couldn’t walk or speak, and I didn’t totally understand exactly what was happening.

My mother began searching for information about hospitals in the United States and decided to take me to Johns Hopkins Hospital. When I got to Johns Hopkins they treated us very differently. I was in a place of hope. After many tests, my neurosurgeon Daniele Rigamonti, performed 2 brain surgeries. The first was 11 hours (April 14, 1999) and the second surgery was 6 hours (April 16, 1999). Because I was being treated in Baltimore, only my mom and a cousin who lived in Maryland were with me. My cousin once told me that my mom could not stop praying, but they were perfect surgeries and I recovered.

I had 2 years of speech, occupational and physical therapy and then returned to college. Despite the fact that it was very difficult due to my memory, aphasia and low vision, I graduated with a Bachelor’s degree. I then went on to earn my Master Degree in Psychology.

During all that time, I still didn’t know much about my AVM. I discovered a web support group where I met so many AVMers who have or have had this rare disease. I learned about what an AVM is, that there are different types of AVM and their locations (my AVM was located in the left temporal lobe), and am still friends with some of the group members. In fact, we became an AVM family.

Things are different these days.  My memory is still not good and I have to write everything down. I use the calendar on my phone to set reminders. I have aphasia, so I sometimes use the wrong word when speaking or writing. I also have hemianopsia, which is a visual field cut on the right side in both eyes. In 2009, I lost more vision as a result of retinal problems and became legally blind. I manage my low vision, but it is not easy. My iPhone has an app that can “read” things for me, and my mom and sister support me and are by my side. My great happiness is life are my two doggies, Morocho and Popcorn. I look back, remembering what happened, the entire process of my illnesses, and still believe that I am so blessed.

Click the photo to learn more about Ninibeth Ramirez Delfaus. 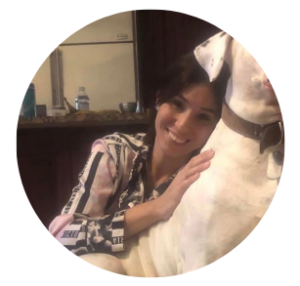 PreviousPrevious post:The Journey of a Cow and a Bear
NextNext post:The Struggle for Our Lives