Feature: The Man in the Dark, Who Gave Me Life

“Can you talk?” I typed anxiously.  “I’m confused and want to talk to someone who’s been through this before.”

I lay awake next to my sleeping husband while record-breaking snow accumulated on our lawn.  From the exterior, my house resembled others on my street – 1920’s colonials, sparkling with fresh snow, filled with families snuggled in warm beds.  From the interior, a different scene unfolded. I had met someone online. I was engulfed in a chat with a stranger, on my computer, under the covers, in the dark, in the middle of the night.

As my lips tingled and chest tightened, I heard snow plows rumble outside.  I felt the hot breath of my 75-pound dog sleep-panting at my feet.  And the smell.  It was the familiar scent of my husband’s crusty white t-shirt tinted blue in the armpits with the deodorant I insisted he wear because it smelled like him, and reminded me of our dating days when I slept in his armpit nook.  I breathed forcefully to prevent a panic attack, but the blizzard inside me raged stronger than the white flurries dancing outside on that wintry night.

I could feel tears running down my cheeks.  I don’t remember if I was audibly sobbing, but my heart broke.  This man.  His words.  I couldn’t believe it.  He didn’t know, and I didn’t know, but he was about to change my life.

Our conversation took place on a Facebook page.  It was not a dating site, a cheating page, or a page to meet people, single or married.  The site was an online support group for anyone impacted by brain arteriovenous malformations (AVMs), an affliction that had consumed my life over the prior year. The site was created and run by TAAF, The Aneurysm and AVM Foundation.

I was 36-years old. I had it all — a devoted husband, two healthy children, a career, a red brick home, even the quintessential yellow labrador frolicking in fresh snow.  I also had a malformation in my brain, a tangle of blood vessels that could burst, cause a stroke, and kill me.

Leading up to that conversation in the dark, I had met with a dozen neurosurgeons on the East Coast.  The doctors said my condition was rare, that I could not be fixed, that I should not be fixed.  “There are too many risks,” they said.  “If you elect brain surgery, you could end up blind, among other unpredictable deficits, including a brain bleed in the operating room. It’s likely that you’ll go into surgery with 100 percent of your senses, but awake with some missing.”

Doctors disagreed on the size and grade of my AVM because it was “diffuse.” But  based on my first angiogram (among several), the nidus measured 6.6 cm and occupied most of my right temporal lobe, bordering the occipital lobe.

The doctors me told me I had to live with, but try to ignore, my “ticking time-bomb”. Doctors treating AVMs often suggest a watch and wait approach, due to the rarity and complexity of these congenital defects.

Except one doctor in the Southwest, who said he could safely remove the web in my brain.  He said it with confidence, with gusto. How I wanted to hear those words, I think.  But fixing me would require surgery, several of them, the longest lasting twelve hours.  First, he would inject glue into my brain, then rip open my head, crack open my skull, resect a piece of my brain, secure it with plates and screws, and staple it back together, a couple of times.  But every step risked a stroke in the operating room and chance of death on the table.

I initially assumed early detection of my AVM was a blessing, until I realized it was a curse.  I faced an incomprehensible decision: to elect multiple complicated brain surgeries against the advice of all but one doctor or to gamble that my brain would never explode in my lifetime.

I viewed both scenarios as equally devastating.  Either cracking my head open from the outside on purpose, or from the inside on its own terms, could kill me or leave me disabled.  Every direction I looked pointed to signs of death, blindness, paralysis, memory loss, stroke.

I spent sleepless nights on this Facebook page.  Previously, I had met a mom whose young daughter suffered an AVM hemorrhage.  She did not escape unscathed; she suffered paralysis and is destined for a lifetime of therapy to regain skills like feeding herself and tying her shoes.   I hoped this mom was awake that night.  I needed to talk to someone, anyone who knew about brain AVMs.

But then I found a different man online.  I asked directly, “I have seen many doctors about my AVM.  Most of them say it is too dangerous to remove, but one doctor says he can do it.  Do you have any advice?”

I shivered under the blankets. I didn’t know this man, but I was desperate for advice. My heart nearly barreled out of my chest.

“Please, if you have the chance, remove that beast,” he wrote. “It is a killer.”

I stared at the screen feeling like my eyes might pop out of their sockets.  I did not expect his adamant response.  I fixated on the text box but he did not reply. I wondered if he had more to say.  I hoped he would explain his answer, but I was not prepared for his next response.

“I would do anything to have my wife back.”

Three little dots lit up, indicating he was continuing to type.

“She died from her AVM, and I cry my sons to sleep every night.”

I waited for more dots to illuminate, but none appeared. Tears bubbled up in the corners of my eyes.

I blinked a few times to clear my tears. More dots.  He shared more.

She had brown hair and olive skin tone. She didn’t know, no one knew, she had a brain tangle, nor had they ever heard of an AVM, until it killed her. There was no warning. It ruptured, and she died. Just like that.

“We wish we would have known. I would have done anything to save her.”

Then he told me the date of her birthday.

I sat straight up in bed with a jolt that frightened our sleeping dog. This man’s beloved wife and I shared the same birthday, St. Patrick’s Day, the luckiest day of the year.  And our children were the same ages, 5 and 3.

For a moment, I wished I had died instead of her.  She didn’t deserve to die, and I wasn’t sure how or why doctors incidentally found my AVM before it ruptured.  None of it made sense.  Why her and not me?

I blankly stared at the screen, still unable to reply, drowning in my own tears, suffocating in my spoiled world filled with love, support, and second chances.  This man and I were online in the middle of the night to discuss the same affliction, but our situations were vastly different.  His wife, the mother of his kids, was dead.

I felt the worst kind of survivor’s guilt that night. I wasn’t a survivor yet, but I had the chance to attempt survival that she never had.

I finally replied. “I am so sorry.  I wish I had words to give you peace.  This is not fair, and I am so mad at myself that I feel scared to have brain surgery.” I worried my words were not kind, loving, or compassionate enough to comfort this man in the dark.

I waited a moment, then I saw the three dots again as his words materialized on my screen. “You should seek treatment if you trust your doctor.  Your family wants you to be with them.  And someday your kids will understand you did this for them.  You are strong.  I just hope I am strong enough for my boys, because I know she would be strong for them.”

I closed my eyes for a few seconds, taking in his words.   I felt the soft pillow behind my back and the warm blanket over my legs and cried a bit more.  I finally wrote, “You are strong, and I know you are a great dad.  Please know that I send your family all my love and best wishes.  I will celebrate your wife every March, always.  May she rest in peace.”

I didn’t know what else to say, and he did not respond again.  I scrolled through our typed conversation in disbelief and re-read the words about March birthdays, young children, and brain bleeds. I looked over at my husband and adjusted the blankets to cover his left shoulder. Although I cried myself to sleep, I knew my tears did not compare to a widower’s in mourning.

What if I had died from my AVM and she lived instead?  I envisioned my babies crying, sleeping in my husband’s armpit nook, still crusty and blue from my favorite deodorant.  I wondered if they would sleep on my side of the bed or if they would leave a space for me. How long would my pillow smell like my shampoo?  Would they be angry if they knew I had a chance to remove my AVM, but chose not to undergo surgery because I was afraid?

The man I met in the dark changed my life and set me on a course, an uncertain course, to remove my AVM. He showed me that discovering my AVM before it hemorrhaged was not a misfortune; it was an opportunity to live.  My decision to elect multiple brain surgeries became clear.  I knew surgery would be risky, but I had to move forward for my family, and for his family too.

I went back to see that doctor. Four brain surgeries later, I am now AVM-free without complications, thanks to a man in the dark, and his wife in the light.

Click the photo to learn more about Vanessa Garza. 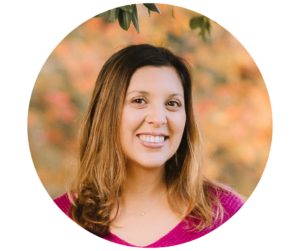 *Note: This piece was previously published in the October 2019 issue of HOPE Magazine.*