Creative Connections in the Time of Covid

This month, during AVM Awareness month, and always, TAAF is committed to supporting, educating, and, when we can, inspiring the AVM and aneurysm community.  However, in the time of COVID, in-person support groups are discouraged, and hugs between survivors, caregivers, family, and friends may not feel safe – we miss those connections.  When our relationships feel limited in action, but our hearts and minds are desperate for connection, it's paramount that we fulfill our needs to interact in some way.  Creativity may be a useful outlet for many of us.

AVM warrior Tom Tyrell (AKA Ridlaa), featured in our June 20 SoapBox article, shared that he faces his journey, confronts his feelings, and connects with others through art, by writing, singing, drawing, and creating films.  Since the release of his AVM docufiction "Middle Finger" this summer, and based on the overwhelming support he received from the AVM community, Tom's self-image and engagement with others continue to evolve.  Once drawn to a "hip hop" crowd and audience, Tom is refocusing his reach on an audience who will appreciate his struggles with neurologic disease.  Tom's AVM and his connection to the community continue to impact his transformation and his limitless creativity capacity.

These illustrations, graciously sent to TAAF from Tom, exhibit a small sample of his creative range from 2006 to 2020 (i.e.,  before his bleed, after his bleed, and through the COVID lockdown).   We are honored to share Tom’s talents with the TAAF community and hope these images inspire you to try something creative.

In his words, Tom also shares how art has helped him express his emotions throughout his life.

Aside from the emotional impact, creativity and neurological illness is a widely studied topic within neuroscience.   "Brain Damage Saved His Music," an article published in January 2015 in Nautilis by Brian Gallagher, tells the story of renowned jazz guitarist Pat Martino.  Martino underwent surgery in 1980 to remove a hemorrhaged AVM in his left temporal lobe.  Doctors removed 70% of his temporal lobe with damage to the hippocampal region.  After surgery, Martino didn't know his name, recognize his parents, or recall being a musician.  But when a former guitar student visited and played a guitar exercise that aggravated Martino before his brain injury, Martino suddenly grabbed the guitar and played with a familiar gusto.  In the months and years to come, as Martino continued to fidget with his guitar, flashes of his memory returned.

A case study of Mr. Martino's brain images "represents the first clinical observation of a patient who exhibited complete recovery from profound amnesia and regained his previous virtuoso status."  Based on the case, neuroscientists agree Martino's case "demonstrates neuroplasticity, the brain's remarkable ability, during development and learning."  Martino's case shows the brain's ability to "compensate for malformations or inquiries by wiring new connections among brain regions that restore motor, intellectual, and emotional functions."    Pat Martino is now 76 years old and lives in Philadelphia.

Friend of TAAF, UK-based vascular neurosurgeon Daniel Walsh FRCS, tells us more about this study, neuroplasticity, and the importance of creativity.  Dr. Walsh practices at King's College Hospital, The London Clinic, and BUPA Cromwell Hospital, and served as Chair of the Society of British Neurological Surgeons from 2017-2019).  We are very thankful to Dr. Walsh for sharing his insight and expertise with TAAF.

I have never considered myself creative.  But thanks to my journey as an AVM survivor, and my relationship with TAAF, I found an outlet that keeps me connected with my feelings, and with others, during this period.

As we continue to raise awareness for aneurysms and AVMs every day, we hope to spark a conversation, to spark a connection, to spark something inside everyone in our community, during the isolating periods of COVID.  If we can't be with each other physically, we encourage you to share your photos, poems, songs, drawings with others, or with us.  Our goal is to generate a conversation, one that brings our community together when we are physically apart, and one that may save us from feelings of isolation in a pandemic.  We know the realities of these diseases are not always positive. Still, we want to connect with you in a way and encourage you to use your creative outlets to communicate with others in this community, when you may not have connected otherwise.  And if you aren't comfortable sharing, we truly hope that you do something creative for YOURSELF.

Click the photo to learn more about our authors. 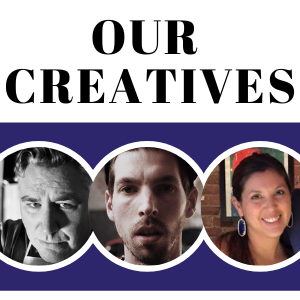 PreviousPrevious post:The Struggle for Our Lives
NextNext post:Opportunity in Crisis