The Gift of Now

When I agreed to write another article for TAAFTalk, I didn’t realize that it was going to need to be a companion piece to my first one.  Back to Mrs. Losk? Is about the battle to REbecome a teacher; the struggle to reclaim a part of my soul that I need, and thought the ruptured aneurysm had taken from me.

There has been another battle going on in me – for self-awareness and self-acceptance – a much less visible and even more challenging journey.  I think that most recovering survivors spend some time in a bifurcated existence; trying to reconcile the self from Before with the reality of Now.  The limbo and uncertainty of that phase left me wondering who I am – most of the old self-definitions don’t apply or have changed.  There are straight up losses that have to be grieved, modifications that need to be recognized and adopted and, yes, even gifts that need to be embraced.  It’s a humbling, empowering, ongoing, exhausting journey, but the rewards make it so worthwhile.  We need to figure out how we FIT in the world.

Before my aneurysm, I was “fiercely independent”.  I only asked for help or support occasionally, and very reluctantly.  That’s not a mindset that works when you need assistance with basic functioning.  So, the fierceness gave way to the “stubborn b*tch”.  I wanted what I wanted and figured out how to get there – working doubly hard in therapies, developing strength and stamina, pushing limits.  I fully embraced the Warrior title at first.  I was always fighting for something, toward something.  But, after a while, I’d reclaimed as much as I could.  I was tired and drained.  There was nothing left for day to day regular activities or enjoyment.  I celebrated the milestones, like “being average” on my PT assessment.  It was a necessary phase, but living life had to be more than destinations and goals

It was time to get to know the present me, to stop battling and start being.  I needed to stop being so frantic and desperate.  It was time to dig deep inside and get to know myself.  This work is hard to share when it’s happening – there’s a ton of trial and error involved.  It’s also invisible to anyone outside us, so positive feedback is difficult to come by.  I wanted it to be recognized when I made good self-care decisions, but, how could they know that I’d struggled?  My husband, Rick, bore a lot of that burden – he was my cheerleader and my protector, and it was challenging for him to know which I needed at any given moment.  It’s been fairly recently that I’ve realized the importance of the process, and this is my first attempt to share with an audience.  It’s a little like letting go of one trapeze before you’ve got hold of the next one.

What have I lost?  I have given up on being able to multitask, both in the classroom and in daily functioning.  I can no longer balance the checkbook while having a conversation.  Or process and respond to several student comments.  One thing at a time is the only way I can do things well.  It’s been an adjustment, but one I can accept.  I realized that quality trumps speed and quantity – every time.

Short term memory has been another casualty.  I always have a notebook and pen handy for lists, notes, events, reminders.  And I’ve accepted that I have to ask for people’s names multiple times (I used to be able to learn a classroom in thirty minutes). I really dislike having to ask again – for repetition, to be reminded of what I was going to do.  I need to consciously make a memory to even have a chance of remembering – mnemonics, associations and rhymes have become my good buddies.

My auditory sensitivity is a challenge.  I have had to forgo many activities that were important Before.  No crowded protests for me in these turbulent times (that’s been difficult), no musicals in a theater (I’m so glad the movie version of Hamilton was released), no more annual Provincetown Carnival (maybe someday).  Noise cancelling headphones have helped at home when there is outside construction or gardeners.  It took a lot of convincing to get me to order them – I did not want to give in, but I’m glad I did.  (Hat tip to Rick for that one.)

A significant loss for me has been the ability I used to have to find the extra juice to get one more thing done.  As a matter of fact, that has become a warning phrase for me.  If I hear myself say, “one more errand or task”, I know it’s time to stop right then.  If I try to push myself through, I will hit the neurofatigue wall and will need serious recovery time.  Neurofatigue is one of the most important concepts I’ve learned about since the rupture.  For me, it’s like a wind up toy slowing down and coming to a complete halt.  I can’t think, I can’t make decisions, I sometimes can’t even get from one place to another.  When I was in rehab and people would ask me a question – even “chocolate or vanilla?” – and I responded “I don’t care!”, we identified that as neurofatigue.  It was my way of saying “STOP!”  These days, it’s more likely to be a glazed-over, befuddled facial expression and general helplessness.  The good news is that, over four years out, it happens much less often.  And, I am more than willing to be patient with myself when it does.

Those are my losses and my accommodations, and I have grieved and accepted them.  And in doing so, I have found a gift.  I have learned to speak up, whether to explain or to state a need.  I have a pride in myself that comes from my journey.  And, I’ve learned the value of self care and its impact on relationships.  Honesty and openness have enhanced my connections in ways I didn’t understand before.

There is so much to be gained by speaking ones’ truth.  “When we speak, we are afraid our words will not be heard or welcomed, but when we are silent, we are still afraid, and so it is better to speak.” (Andre Lorde).  It’s a gift we can all claim in whatever way we choose.  We’ve faced real fear and made it to the other side.  My fierce Before existence was armor and it’s been stripped away.  I’m glad it’s gone.  I’ve accepted my limitations and have learned to tell people about them.  I no longer worry that people won’t think I’m ____   enough or about how they will react.  I can only be real – I’ve let go of the ability to dissemble and be guarded, and I don’t miss it.  Facing the fear in the fight for survival freed me.  I miss the ease of doing that I had before, but I love the ease of being that I have now.

It’s Brain Aneurysm Awareness month.  I wish for each of you the gift of self-awareness and the freedom it can bring.  Here are some steps to guide you:
Grieve what you miss – the losses are real and valid

Accept the changes – give yourself permission to do things differently

Look for the gifts – you are free to embrace them.

Click the photo to learn more about Beth Losk. 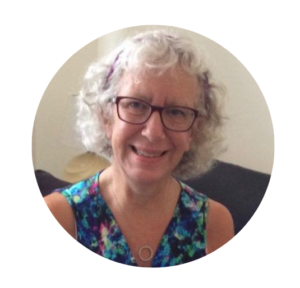