SCI-FIT is Family: An AVM Survivor and his Mentor

On February 22, 2018, at 17 years old, Andrew woke up throwing up and holding the back of his head. Within minutes he went completely unconscious. His family called 911, and Andrew was taken by ambulance to Clovis Community where they performed a bedside CT in the ER and saw that he had a massive brain bleed. Andrew was rushed to Fresno Community which is a trauma hospital and the neurosurgeon came out and said he needed to drill a hole in his skull to release the pressure, that Andrew had an AVM and it had ruptured. This massive bleed was a stroke.

How does this happen? How does a 17 year-old have a stroke?

Andrew’s family had never even heard of an AVM. They quickly gave consent for the neuro team to drill the hole and put in an EVD drain. Andrew was then taken by medic flight to UCSF Benioff Children’s Hospital in San Francisco. He was in critical condition and the team had no idea if he would survive. Andrew was rushed into the ICU where there were at least 30 doctors, nurses, and techs waiting for him. Still completely unresponsive, Andrew had another EVD put in, and within hours the team realized that wasn’t going to relieve the pressure enough and he was rushed into surgery to remove the whole left side of his skull.

The surgeons didn’t know how to get to Andrew’s AVM or the aneurysm they’d also found. The neurosurgery team had many meetings trying to figure out the safest way to approach this monster. Because of its complexity, they called on Dr. Abla, an adult neurosurgeon, to perform the surgery. Once Andrew was stabilized, a whopping 2 1/2 weeks later, he had his AVM resected and his aneurysm clipped. His family was in complete devastation; they didn’t know if he would make it and were told that if he did, Andrew wasn’t going to be the same. They were warned that he would be completely paralyzed on his right side, and because of where and how bad the bleed was that he would probably never talk again. They were so crushed but never gave up faith.

Andrew’s family still felt blessed to be in a hospital that specialized in AVM’s and whose Neurology and Neurosurgery team was the best in the nation. They felt that Andrew was also blessed to be under the care of Dr. Gupta, Dr. Fox, and Dr. Fullerton, as well as so many other amazing doctors and nurses at UCSF Benioff Hospital. And they understood that while it was an extremely rough road ahead, Andrew would push through, which he did.

Andrew attacked every obstacle he was faced with. He’d been on a ventilator, had pneumonia, blood clots in his legs and arm, and another surgery to put his bone flap back in with titanium plates. There were so many things he had to go through, and once he was out of ICU a month later, he began PT, OT, and speech therapy. During this time he was on a feeding tube and went through countless tests and scans. But Andrew is also a big jokester; so even though he couldn’t speak, he still found ways to make his family laugh and let them know he was there.

Andrew learned how to walk and talk again with enormous amounts of therapy. After three months, he was able to come home where he walked short distances with a gait belt and used some words. At this time, Andrew suffered from severe aphasia, or the loss of ability to understand or express speech. There was much work to be done.

Andrew attended PT, OT, and speech therapy for another year in an outpatient facility local to his home, and the team there felt that he’d reached his maximum recovery at that point. Unsatisfied with just quitting therapy, Andrew’s family learned of SCI Fit which had just recently opened up in Clovis, CA. Their mission was to provide the most comprehensive post-traditional, exercise therapy for those individuals who have suffered a debilitating injury. Andrew started going there twice a week for one-hour sessions. The team at SCI Fit worked with him one-on-one and pushed Andrew to keep going and focus on recovering further, and building up stamina. Steve, the owner, was amazing with Andrew, and they realized from the start that they had a great connection. Andrew’s family realized that he enjoyed going to SCI Fit even though it was hard work because they were so encouraging and because they challenged him in such a positive way.

Steve and Mitch created such a positive environment that Andrew continued to thrive. And then COVID came, and Andrew stopped attending. His family puzzled just how to move him forward in life, and that’s when Andrew was offered the opportunity to volunteer at SCI Fit instead. Steve was so welcoming with him and took Andrew under his wing. He took the time daily to show Andrew things he could do at the facility, and Andrew quickly grew to love being of service to others who were doing therapy there, clients like him who were recovering in their own way.

Months later, Andrew loves being an inspiration to other patients at SCI Fit. He wears his scars on his head and his SCI Fit shirt with huge pride. Most recently, he even enjoys sharing his AVM journey. Andrew says that going to SCI Fit and helping others fills his heart. He takes such pride in what he does there, and Steve has been an amazing mentor to him, ensuring that Andrew is not sacrificing his own recovery while volunteering. Steve reminds Andrew to use his right hand though this isn’t easy, and adds that it’s ok if it slows him down. The practice is important for Andrew’s recovery. A bond has formed, and Andrew goes in early a few days a week to work out with Steve. Simply, Steve’s commitment has meant the world to Andrew and his family. They have felt, first hand, the positive environment at SCI Fit, and it’s amazed them.

Andrew's days are still challenging. He struggles with Aphasia and right sided mobility issues, but he always focuses on the positive and pushes through everything else with laughter. After a year of volunteering, Andrew and his family remain grateful for his part in such an inspirational place as SCI Fit. In fact, he recently celebrated his 22nd birthday with Steve, Mitch and Joel in attendance. As an AVM survivor, the day was exceptionally important for so many reasons, Andrew’s beaming face being the best. The support Andrew received from Steve and others at SCI Fit has certainly made them friends, but the dedication and love shown to Andrew made them family.

To learn more about Andrew and SciFit, click below. 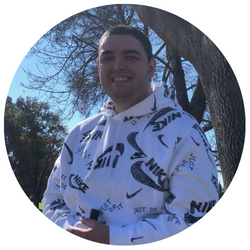 PreviousPrevious post:SCI-FIT: A Personal Approach to an Often Impersonal Problem
NextNext post:You’re Not the Boss of Me