On the cover of his new EP Ninety-Four, released September 18, 2020, Shawn Goodman’s distinct silhouette stands juxtaposed against a foggy background. Some buildings in the image emanate light from their windows and spires; others are dark and shadowy, frayed at the edges. But after meeting @mrgoodmanoffical, there is no doubt that he unmistakably rises above that haze with his feet firmly planted atop several city skylines, ready to move in one direction: forward.

The five tracks on Shawn’s EP, “Coincidence,” “For You,” “Love Bug,” “My Oh My,” and “Human,” solely written by Shawn, will take you on a trip through time, modernizing Soul and R&B styles from the mid-90s through today.

But the choppy rhythm of Shawn’s life during that same time does not mirror the smooth beats that portray his music.

Born in Green Bay, Shawn’s earliest memories entail moving from his childhood home into shelter care. As an orphan, Shawn consistently felt left behind, and he desired attention. As the kid labeled with a “troubled history,” he was bullied, teased, and emotionally bruised, and often turned to music to find solace. Although hurdles in his adolescence persisted, Shawn is now, proudly, twice adopted into a Jewish family, a musician, a native of Dallas, and a two-time aneurysm survivor.

In 2019, at the age of 25, Shawn worked for a non-profit organization designed to provide underprivileged and homeless children opportunities. To Shawn these kids were kindred spirits, their lives echoing that of his, and his desire to serve them, to give back, was unwavering. Fatefully, however, on June 11, 2019, Shawn was on a skating rink field trip with the kids, engaged in a friendly competition. Although he doesn’t recall much leading up to the precise moment, he remembers the music stopped, he fell forward, and his head snapped back.

Moments following his fall, pain erupted in his head, but he continued to complete another skating lap with the kids, dismissing the pain. When he could no longer ignore the pain, he made his way to the floor. He felt hopeless, dealing with the excruciating discomfort. Eventually, he arrived home and vomited but felt no relief. He used every ounce of energy to find his way to bed, where he dozed in and out of consciousness. With no other choice except death, he proceeded to the nearest hospital.

Pushed in a wheelchair, the ER team checked his vitals and informed him there was nothing they could do for him there. Subsequently, a care team rushed Shawn to the nearest trauma hospital, the only place he could receive adequate care. Shawn doesn’t recall any of the events that unfolded until he awoke in a hospital bed intubated and hooked up to various tubes and machines. Doctors then informed him they had performed emergency surgery upon arrival as two aneurysms had burst consecutively in his brain.

After the emergency surgeries, Shawn spent two months recovering, focusing on exhausting speech therapy, walking, and breathing exercises. He had to relearn how to walk, talk, and solve problems; even now, the latter impedes him daily. Over one year later, at age 26, Shawn continues to heal, taking life day by day, unceasingly fighting extreme fatigue and memory issues. Sometimes Shawn can recall past events with ease, but an event that may have occurred one minute prior may have vanished from his mind forever.

Shawn has given and continues to share his time, his energy, and love with at-risk children. He has worked with the same organization for over ten years, finding inner peace as he battles the psychological trauma caused by his turbulent childhood. He intends to continue his work with children despite the physical and mental setbacks caused by his ruptured aneurysms.

Shawn summarizes his track, “Human,” with the following description:

“Life is like giving people rides in your own car. As humans, we tend to take people places on our backs. The only thing we ask for in return is attention as if it’s gas money. We forget to pay attention to ourselves, so we hardly get where we need to go.”

As shown in the EP cover, Shawn is paying attention to where he needs to go now. He is resilient, and he is a fighter who has learned much about life, love, and relationships in his journey – both positive and negative. As Shawn embarks on his music career and continues to recover from his aneurysm bleeds and subsequent surgeries, he will not be left behind this time, unlike his childhood. He’s moving forward with his goals set on singing/writing music to give back to children who may need his help. Through working with non-profit organizations focused on children, and through songwriting and performing, Shawn has mapped out a personal gateway for peace.

On behalf of TAAF, we want to congratulate @mrgoodmanofficial on the release of his EP! His dedication to helping others aligns with TAAF’s mission of serving others, and we are grateful to support his endeavors. It is no coincidence that we introduce the TAAF community to Shawn during Aneurysm Awareness Month when the world works together to raise awareness of the signs, symptoms, and risk factors of brain aneurysms. Shawn’s strength and dedication to service embody TAAF’s spirit within the aneurysm community, and we proudly share his story. Shawn deserves our friendship and love, and TAAF is lucky to share our hearts with him.

Click the photo to learn more about Shawn Goodman. 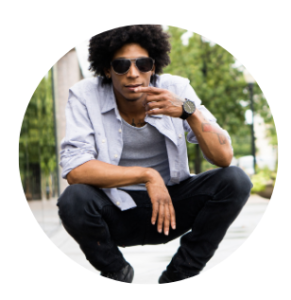