In Yiddish we have a saying: Beshert. It roughly translates to “meant to be,” and it’s used when talking about a couple getting married or being at the right place at the right time. But I often use the term to describe my experience as a ruptured brain aneurysm and AVM survivor.

In July of 2012, life was going great. I was in the best shape of my life at 29 years old, I had a great job, and my (now) husband and I had a wonderful relationship. Besides having two aging dogs with health issues, everything was as it should bel. Or so we thought. Early evening on July 17th, I suddenly experienced the worst headache of my life while I was at home alone finishing up work (I worked from home at the time before it was the “thing” to do like it is now). What followed was a two-week stay at UT Southwestern Medical Center in Dallas, Texas where they discovered that I not only had a very unique AVM, but I had also suffered from a ruptured aneurysm.

Even though I had gone through a very traumatic medical event, I actually walked out of the hospital two weeks later. I’d had brain surgery to repair my aneurysm, and luckily it had left me with zero deficits besides a bruised ego and what was later diagnosed as medical PTSD. This experience served as a wake up call to me and my husband. I had gone through what some would call a near death experience (I didn’t see the tunnel of light, just a strange hallucination of having an EKG done). We both realized that we weren’t truly happy with our lives afterall. Sure we had good jobs in finance, but we were desk jockeys like in the movie Office Space, working a 9-5 with weekends off and only 2 weeks a year to go out and adventure. Exactly a year after I had my life-saving brain surgery, we quit our jobs, packed up 7 duffel bags of our most valued possessions, and moved to Alaska. We both share a passion for aviation, and Alaska was a wonderful opportunity to live and work within our passion! My husband was able to start his career as a cargo pilot flying 747s, and I have a career as a Flight Attendant and a Flight Attendant trainer.

Some might wonder if a move to the Last Frontier would be a good idea for someone who has an active AVM. Most worry that the medical care in Alaska is sub-par compared to what one may find “outside. But I have been very fortunate and have an AMAZING neuro team in Anchorage that work together with each other and communicate with me, each other, and the doctors outside of the state to determine what is the best treatment for me.

In March of 2020, my seemingly dormant AVM, that had never caused me any problems, decided it wanted to bleed. My neurovascular surgeon in Anchorage has been amazing and immediately performed an angiogram to ensure that it was the AVM that was bleeding and that  I had not developed any new aneurysms. Once she reviewed my angiogram, she contacted my neurosurgeon in Texas to discuss her findings and ask his opinion on the course of treatment. Both of them agreed that Gamma Knife would be the best route due to the location and anatomy of my AVM. But she wanted yet another opinion, so she asked me who I wanted her to contact for a 4th opinion. We obtained Dr. Michael Lawton’s contact information through TAAF, and she got in touch with him immediately. He agreed with the course of treatment, so we went ahead with Gamma Knife in June of 2020.

Unfortunately about 4 months after Gamma Knife, I developed a massive amount of brain swelling as a result of the radiation, and it was not responding to steroid treatment. I even ended up in the hospital in Seattle for 3 days after experiencing pre-seizure activity while I was working a flight. As luck would have it, my neurosurgeon in Alaska communicated with all the doctors in

Seattle, made sure they had all of my medical history and images, and she insisted I come see her the moment I got back home to Anchorage. Since steroid treatment wasn’t working to reduce the swelling, she had one more treatment option in her back pocket... intra-arterial Avastin.

Avastin is a monoclonal antibody that is typically given as an intravenous treatment for some forms of cancer but has also been shown to reduce radiation induced cerebral edema. Two doctors in Kentucky actually pioneered a procedure where they were able to inject Avastin directly into the brain, avoiding weekly, high dose injections which can have systemic effects on the body. Using an angiography catheter, they were able to inject mannitol directly into the brain which breaks down the blood brain barrier for approximately 14 minutes. During that 14 minute time window, the surgeon can then inject Avastin directly into the brain tissue where it can get to work reducing the swelling. If you believe in luck, my neurosurgeon knew one of these two doctors who had pioneered this procedure and contacted him to get their protocol.

I was in the hospital for one night to make sure my vitals were stable, and then I started to wean off the steroids. By summer I was totally off high dose steroids, and by fall I was off any maintenance steroids (like hydrocortisone, which I was put on to ensure my adrenal gland didn’t go into adrenal crisis) all together. I was back to work, back to hiking, flying around in my own plane in Alaska, and climbing and traveling like a mad woman now that travel was reopened.

I just finished a 2 week sailing course in the Canary Islands which isn’t bad for a woman who had to re-learn how to tie her shoes just 2 years ago! So when people ask me if I feel upset that this all happened to me, or if I ever ask “why me,” I tell them no, not at all. I feel like all of this happened to me for a very big reason. If none of this happened to me I wouldn’t be living in Alaska, working my dream job, traveling, hiking, flying and doing all the things I love. My amazing neurosurgeon in Alaska would also not have had the opportunity to perform the Avastin procedure which she has now performed on other patients with radiation-induced cerebral edema, something incredibly beneficial to the entire community and who would otherwise have had to travel out of state for the life-changing procedure.

I get, yes I said get and not have, to have my 6 month follow-up MRI at the end of October, and then on November 1st I get to visit with my neurosurgeon. We are hoping for more good news. I hope to learn that “Gary,” my AVM, is gone and that any edema that was still lingering as of my last MRI is gone as well!

BTW: Sailing is NOT easy or glamorous like it seems in movies and TV shows. It’s hard work, but it’s also another thing I’m adding to my passion list, something amazing I got to experience because I am still here. Plus, it really is great brain exercise.

To learn more about Lindsay Raber, click the photo below. 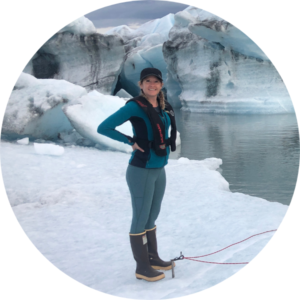