Does everything happen for a reason?

The short answer is yes.

Nothing happens without some form of influence.  Why did the ball fly out of the ballpark?  Because one person threw it very fast at someone else and a third person swung a piece of wood striking the ball and propelling it in the opposite direction out of the aforementioned park.  That’s called physics.  Specifically, that is Newton’s third law of motion.

That’s not what people mean when they ask that question though.  It’s not meant to be a physics question, but more of a philosophy question. Usually, when it is said in my direction, it’s not even said as a question.  It’s usually meant to be a soothing platitude when something tragic happens.  So we are forced to absorb that question (or statement) and try to process it as relief from the tragedy because that is how it was meant.

So let’s put Newton’s laws aside and decide if, philosophically speaking, things happen for a reason.  The long answer is maybe (what a great philosophical answer).

For me, the answer has changed as I process the tragedy.  Thankfully, no one close to me said this to me in the moments, hours, or days following the death of my son due to a ruptured AVM on his brain.  I don’t think I would have been able to process that platitude, in that time period, without a clenched fist.

A few weeks later, this was said to me following a celebration of life service held in my son’s honor.  I had just put a spork full of delicious church-lady potato salad in my mouth (Lutherans make some of the best potato salad) when a well meaning, older member of our congregation felt the need to give me a side hug.  She told me how sorry she was for my loss, to which I politely nodded my head, and followed it up with “Remember, everything happens for a reason”.  If it wasn’t for the potato salad she probably would have gotten more than an eye roll.  What could possibly be the reason my son was taken from me in that way Diane?!? (Name changed to protect the well-meaning)

That moment is now almost 5 years behind me.  The sharp hot pain and anger I feel when I think about losing my son William is now slightly cooled by the support and empathy I am able to provide to others.

Things happen.  Sometimes they suck and in the moment, there are no conceivable “reasons” why.   Only with the addition of time and positive energy (sometimes a lot of time and energy) can the reasons start to come into focus.

So, what are the “reasons” I tell myself when the pain of loss creeps back in?  Let me preface this by saying these reasons are mine.  They are not yours.  You may have or develop similar reasons, but they will be wholly and completely yours and no one else’s.

The first and most powerful for me would be the galvanization of relationships.  A few people, who I knew as friends prior to William's death, became family through their overwhelming love and support.  I have made it my goal to make sure these people know how I feel and that I will forever be in their debt.  Whenever I am faced with a friend who has experienced a tragedy I reflect on how these people treated me and strive to do the same.

The second is the discovery of a new community.  This one I owe to Dina and TAAF (and my wife for seeking them out in the first place).  Having a place where William’s disease is not strange or unknown and can be talked about clinically has brought me peace.  It is refreshing to be able to talk about William without needing to pause and explain what an AVM is.  I  know I can reach out to the TAAF community whenever I need an extra ear to listen or a soapbox to stand on.  The TAAF community also gives me an outlet to help others through my donations of time, energy, and expertise.

Lastly, William's disease and subsequent hospital stay has given me knowledge.  I didn’t discover this until shortly after the birth of William’s little brother, Logan.  William’s entire life was spent under the excellent care of NICU nurses and doctors with his parents by his side as often as possible.  During that time, Nancy and I learned the terminology and jargon used by the nurses and doctors.  After a few days of this we didn’t have to wait for the doctor to explain the orders he gave to the nurses.

Fast forward to the birth of William’s little brother.  Like his big brother, Logan was born almost 5 week premature and spent the first 10 days of his life in the NICU as his lungs continued to develop.  Early on we made it clear to Logan’s nurses and doctors that we were familiar with the terminology they used amongst each other.  One of his doctors even pulled me aside at one point to ask if I had any formal medical training.  As unfortunate as it may be, I truly believe the level of care Logan received was directly influenced by demonstrating our knowledge early on and knowing what questions to ask.

These are the reasons I think about when someone decides they need to comfort me with this platitude.  Yours may be similar or you may not have found them yet.  They may also be fluid and change from year to year, season to season, day to day or even moment to moment.

There is a reason for that…

To learn more about Josh Nauman, click the photo below. 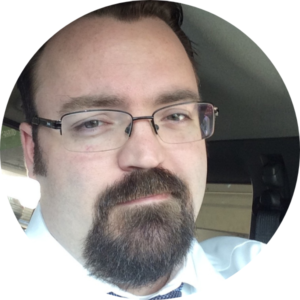