Finding a Voice for the Voiceless

I’ve suffered from migraines for almost 10 years. I’ve known many people that also get migraines and they would try to recommend different remedies and ways to get rid of them, but nothing seemed to work. Advil and sleep were the routine treatment that just became an everyday part of my life, and I just dealt with the pain.

About a year before my rupture, I asked my primary doctor about getting an MRI of my head to see if there was a reason for my headaches. Although the inner voice in my head told me to get the MRI, the busyness of life caused me to never get around to it; I regret never getting it done.

Thursday September 5, 2019, the day of my AVM rupture, started as just another day at work, another migraine at work…nothing new. I came home and made myself something to eat, again ignoring the migraine. My girlfriend was on her way home from work and asked me if I wanted to go to the gym. When she arrived, I didn’t even mention the migraine to her because it was a normal thing. We got ready for the gym and off we went.

We decided to do some cardio and got on the elliptical side by side. About 5 minutes into it, the headache became the worst headache of my life, as well as added neck stiffness. Confused about the amount of pain, I stepped off the elliptical and told her I had a bad headache (which is the first she had heard of it ). She told me there was cold water in the car, to take a minute and go get some. I walked to the car and felt like I was overheating. I got in, blasted the AC, and started sipping on the cold water. A few minutes went by and I got a text from her asking if I was okay. “I’m not okay, my neck and head are killing me”, I replied. At that point she knew something was wrong and was already on her way back to the car to check on me.  When she got to the car she asked me what was going on and I couldn’t reply. I started vomiting and was semi-lethargic. She decided to call 911 and the firemen were there within 10 minutes.

When they arrived they pulled me out of the car and walked me onto a sidewalk. My girlfriend said I was stumbling and could barely walk. They took my vitals and told me that everything looked normal, that they didn’t see a reason to transport me to the hospital; I could either drive myself or just go home. But, my girlfriend knew I didn’t look like myself and that something was wrong. She asked if they could please take me. They turned to me and asked me what I wanted. Knowing they were professionals, I took their recommendation, ignoring my inner voice. I told them that we would drive ourselves, and the firemen left.

My girlfriend drove me 20 minutes away to the nearest hospital, St. Mary’s Medical Center in Downtown Long Beach. At that point I don’t remember much, I had blacked out from the pain. She tells me that when she arrived parking was a struggle (welcome to the city),  and she spent almost 5 minutes looking for parking. She couldn’t find any so she ended up parking on a red curb. She walked me to the ER, stumbling and lethargic, and sat me down in a chair while she went and signed me in. We spent almost an hour in the waiting room as I vomited, my girlfriend begging for them to take me. The Emergency Room staff kept assuring her that we were up soon and we have to wait our turn.

Once it was finally my turn they took me straight to get a CT scan. After my CT scan, they brought me back to a room where my girlfriend was waiting. They explained to her that I was having a brain bleed and they were sending me to ICU where they would put me in an induced coma. That same night they put a drain in my head to drain the blood. On September 7th, 2019, two days after inserting the drain, they performed an embolization.

The doctor told my girlfriend and family that the embolization went well and that they were going to keep me in a coma to see how I do and if I would heal. Early the next week, the neurologist said they were going to slowly start weaning me off of the sedation. A week later, I finally woke up and began to slowly process what had happened. Little did I know that was just the beginning of my journey.

The doctors told my girlfriend and family that I could possibly wake up with loss in movement on my left side, speech problems, brain damage, etc. When I woke up, I had short term memory loss and weakness in my left side. I ended up spending the next month at the hospital in rehab getting my strength back.

At first I felt emotionless and I didn’t really process everything right away. I remember bits and pieces of waking up out of a coma and rehab, and it took me some time to realize what I had gone through. It took me months to mentally get back to my old self, to process what actually happened.

I recently went back to my neurologist at St. Mary’s for a 3 month angiogram check up. He let us know that there was some residual AVM that needed to be taken care of or it could rupture again. I had the option of another embolization or gamma knife radiation. After speaking to him and my other neurologist in Long Beach, I listened to the voice in my head and decided that gamma knife radiation was the best option for the residual AVM. It was an outpatient procedure versus surgery that came along with a risk of a stroke.

The procedure was delayed for many months due to COVID-19, but on May 26, 2020 I underwent Gamma Knife radiation at Keck Medicine of USC in Los Angeles, which is where my neurologist had referred me.

Although Gamma Knife can take several years to cure the AVM, I haven’t had any side effects, including headaches, and I am hopeful for my future. As frustrated as I was with going so long without getting answers, the lack of immediacy in my care from emergency services at the gym and the Emergency Room staff I know that if I had listened to that little voice in my head, it would have been found earlier.

I am thankful to be alive and on this journey. My experience has motivated me to be the voice for others and bring awareness to the medical community about what symptoms to look for following a rupture and the importance of immediate care in order to have the best possible outcome.

Click the photo to learn more about George Valdez 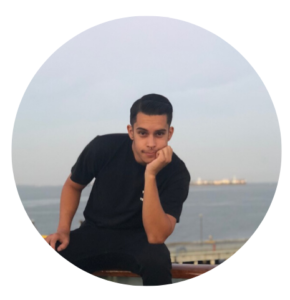