Her History, Our Challenge

As I sit here in the firetruck staged for an EMS call, I observe my med crew gaining entry to a residence. They’re wearing protective gear from head to toe due to the COVID virus. They’re part of my team, my community and I am aware that I have felt worried for them, though the concern I feel is more deeply ingrained.  My mind wanders and I think of Orson Wells’ “War of the Worlds” broadcast many years ago. Before the broadcast everyone was advised that it was a story and throughout the program it was repeated numerous times to be fiction. It was a beautifully written piece of literature but it’s effect on the public through this broadcast was not what folks intended. The public couldn’t believe what was happening, though the fake threat was eventually explained away and their fears alleviated. So why is this pertinent? Picture someone you love suffering an unexpected illness or injury. You’ve been advised of the signs and symptoms but your brain is on overload, words going in one ear and out the other. You cannot believe what is happening let alone understand 1/3 of the words thrown at you. You are not the one who has suffered the injury but as a caregiver, you ARE affected. After a period of time the initial fear you felt may ease, but your loved one’s deficits from the injury linger. These issues will manifest themselves.  You’ll be witness to them and will face them together. Perhaps this is you? Maybe not. But as I watch my crew I think of my smaller community. I think of my wife.

Stop thinking of Wells and creatures from outer space.  Instead imagine a vibrant, bubbly typical American teenage girl. A small, 15 year old gymnast who attended camps with some of the biggest names in the Olympics. A girl who had a chance to become a cheerleader. She and her friends did typical teenage girl stuff –  going skating, horseback riding, listening to music  and of course they talked about nothing but boys.  Then, while at school, an excruciating pain in her head sends her to the school office unable to maintain her balance. Her vision is blurred and she is weak and crying from the pain. Now consider that same teenager in the ER when a healthcare team pumps her stomach, assuming she’s consumed some sort of “chemical.” Rather than admitting her, she’s sent home in an altered state of consciousness only to awaken a few hours later screaming from the pain in her head. The young lady’s mother calls the family’s pediatrician demanding he re-evaluate her daughter and perform a CT scan. To everyone’s surprise, the physician relents and discovers an AVM has ruptured in the girl’s brain. A stroke-like incident, pressure building inside her head from blood. The tiny gymnast is rushed by ambulance to Texas Children’s Hospital with little hope of surviving.  By the grace of God, she is saved through a craniotomy which allows surgeons to both relieve the pressure and remove the tangled mass. The next morning she awakens to find her head’s been shaved, she has multiple sutures from a flap of bone having been removed, oh… and it’s her 16th birthday!

This is what my wife Caryn experienced when her arteriovenous malformation (AVM) ruptured in her temporal lobe, an injury that was the result of the rupture just as much as the craniotomy itself. My understanding is that temporal lobe injuries tend to impact sound, visual perception and language comprehension, manifesting in what’s known as aphasia. Frontal lobe injuries can also cause muscle weakness, a decline in thinking skills, affect behavior and personality and be responsible for memory loss. Because Caryn’s AVM affected multiple lobes it caused multiple issues.

Caryn is the sweetest, most compassionate person I have ever met. Like anyone, she can be affected by specific stressors. How or to what degree the stress affects her has changed because of her original injury.  I know that when Caryn is worn out and stressed I should prepare for sudden mood swings and even personality changes. Usually at this point her sensitivity to sound increases as her visual acuity diminishes. This can increase the chances of her running into something or even falling. This is also where aphasia becomes more noticeable, making it more difficult for her to communicate.  When I am upset, I am a very loud person and my loudness only causes additional discomfort and strife. We have had to learn that once each of us is calmed, Caryn’s issues are lessened.  It is as though they revert to pre-incident and I am again communicating with my happy, easy-going, wonderful, sweet wife. It’s a double-edged sword. There are challenges, but it’s also very rewarding to know that even when we do argue, afterwards there is really no animosity at all. It’s like a completely clean slate. Not many relationships have that luxury.

The love of my life, my best friend comes with a few issues; but hey, so do I. Caryn by all appearances has no outward signs of any injury or deficits from her rupture. People just don’t understand the ways in which survivors are affected so we are definitely one another’s community.  We lean on one another.  Caryn also works full-time although her doctor told her many years ago that she would never work again. My sweetheart just keeps beating the odds proving that determination, grit, stubbornness and desire overcome most obstacles. She finds strength in service and her compassion for helping animals or people in need is profound. I fondly call her my neighborhood cat lady as she adopts and cares for many strays. When she isn’t dealing with lost pets she has a love of photography and can often be found chatting online with her Texas AVM group.  I think that because she’s in healthcare, Caryn has developed a special ear/eye for those who may also have suffered a brain injury and she is a great support and resource to others. Her compassion to assist those who have suffered a brain injury also includes participating in TAAF events and programming and in assisting her Texas team with fundraising or education. This year was going to be legendary. For the first time ever  Caryn was going to fly to San Francisco to participate in TAAF’s 15th Anniversary Awareness Walk; which coincidentally is also Caryn’s 35 year ANNIEversary!  While we won’t be able to travel because of the virus, we will definitely be tuning in on August 9th.

As a caregiver of a loved one who has experienced an injury to her brain from an AVM, I’m aware that I am going to face challenges; especially when Caryn’s deficits affect her day-to-day. I know that when this occurs my stress level is going to increase, my temper will worsen, and my fuse will get shorter. I also know that I have to hold my breath, count to ten, and remember that it isn’t personal. More often than not I’m witnessing the remnants of an injury from 35 years ago. But I still worry.  What if my insurance doesn’t cover us if, God forbid, she suffers another rupture?  What if her unemployment is insufficient?  How would we sustain ourselves? But then I pause and remember we have a plan. We will survive it.  When my stress level isn’t lessened by counting to ten, burning it off, or turning to Caryn, I rely on my faith and our Lord allows and grants me the most peace. I have also found that being actively involved in Caryn’s support of her Texas AVM group as well as TAAF has not only allowed her to thrive and interact with people, it has also allowed me to network, build our community and to turn to them as an outlet when times get hard and I need advice. The Aneurysm and AVM Foundation has been beneficial not just by involving Caryn in charitable service,  it also allows me the ability to focus and have another thing in common that she and I can share. My tenacity to FINALLY get Caryn on an airplane became quite the joke this past year among our AVM friends, allowing her to participate at the national level and network on a larger scale within the community.  What everyone failed to see was that it actually created a little niche for me to participate too. It was a way I knew I could help.

Click the photo to learn more about John Rawls 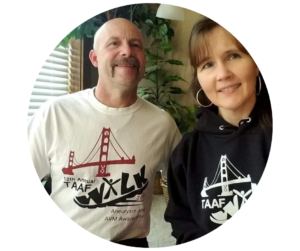